The National Library of Medicine (NLM) and its partners in the Bethesda Hospitals’ Emergency Preparedness Partnership (BHEPP) recently put their research to the test during a massive disaster drill.

The drill, held last month, is known as the Collaborative Multi-Agency Exercise (CMAX). It takes place every year, but this year it was part of the Capital Shield exercise that included 28 hospitals throughout the Washington metro region. 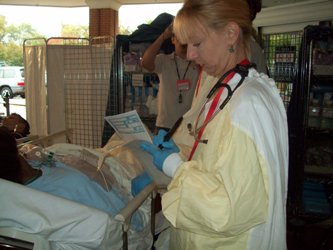 With volunteers dressed as “victims,” the hospitals evaluated how they would respond to, and work together, during a catastrophic event. Recognizing the importance of communication and information sharing during a man-made or natural disaster, NLM and its partners are working to address the communication problems hospitals may experience. Staff from several NLM departments tested five projects during the drill.

NLM’s Disaster Information Management Research Center, part of SIS, coordinates all of the Library’s disaster-related research. The research projects tested during the drill are among 11 projects funded as part of the Bethesda Hospitals’ Emergency Preparedness Partnership (BHEPP). The partnership includes NLM and the NIH Clinical Center on the National Institutes of Health campus in Bethesda, Md., and two neighboring hospitals, the National Naval Medical Center and Suburban Hospital/Johns Hopkins Medicine. The three hospitals formed the partnership in 2004 to work together in a disaster and to serve as a model that could be used around the country. NLM joined the effort in 2008. Congress provided funding from 2004-2008.