The NLM journal publisher liaison, who began her career as a MEDLINE indexer in 1991, said she was hired because she has a science background and speaks several languages. “If you have a basic understanding of science and how to read it, you can learn to master different subject areas,” Stanger said. 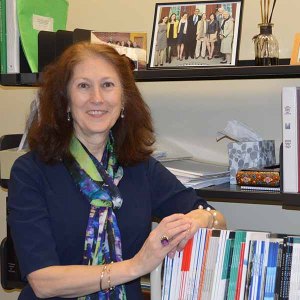 That basic understanding has guided her career in unexpected ways. “When I had small children, I asked to index pediatric journals. Next, I took a turn into immunology, then cancer, and kept going,” she said. “Quickly, I learned MeSH, the vocabulary used for indexing. Once you’re familiar with MeSH, you can do anything.”

Stanger also brought a flair for languages to her indexing responsibilities. She went to elementary school in France and can read and speak French, Spanish, and Italian. She indexed many journals that were not published in English.

In time, Stanger became an NLM index section supervisor, training new indexers and learning about journal policy matters. In December of 2012, she took on her current position, reaching out to the worldwide journal publisher community. She is seeing MEDLINE keep up with new and expanding biomedical fields and also with publishing practices over time.

Stanger speaks to a lot of people at meetings and conferences, one-on-one, or by phone. “In my time in this job, I’ve seen encouraging developments like an increase in submissions from developing countries, hoping to see their journals included in MEDLINE,” she said. “Open access and e-journals have opened the doors for more people to find the articles they need, but now we need to stay on guard to make sure that these things are legit.”

She said, “I like talking to people. I like getting a feel for the journal community. I like meeting people from around the world—who also love NLM!”