The students’ gasps were audible when Dr. Lawrence Tabak, principal deputy director at NIH, shared how many times his medical school applications were rejected.

Not once. Not twice. No.

His 29 applications were all rejected.

And yet, he persevered.

Perseverance, motivation, curiosity, and the importance of mentors were just a few of the themes of the Mentoring in Medicine event on April 7 at NIH.

Science Day was a partnership between NLM, the National Institute on Minority Health and Health Disparities, the Friends of the National Library of Medicine, and Mentoring in Medicine, a nonprofit organization that works to inspire disadvantaged and low-income students to become health care professionals.

In a video welcoming the students, Dr. Patricia Flatley Brennan, director of NLM, emphasized that the day was a time for students “to think about the future” and “ask questions.” In his video segment, Dr. Eliseo J. Pérez-Stable, director of the National Institute on Minority Health and Health Disparities, said he hoped the students would come away with “ideas for moving forward in the fascinating world of medicine or biomedical science.”

In her introductory remarks, Betsy Humphreys, deputy director of NLM, stressed that there are many different paths to a scientific career. But her main message for the students was timely and evergreen: Knowledge builds upon knowledge.

Through speeches, demonstrations, and hands-on activities, students got to build upon their knowledge by learning what it might be like to work in a lab, a medical office, and, of course, a medical library.

He attended the only college he could afford, City College, because it was free if he maintained a B average. He basically did three things in college: maintain that B average, play hoops, and work full-time to cover his living expenses.

Dr. Lawrence Tabak gave an overview of NIH and shared his personal journey.

There weren’t any expectations that he would attend college. No one in his family had even graduated with an academic diploma from high school before.

And his father? “The only thing he ever gave me was a Y chromosome,” explained Dr. Tabak. It took a minute, but the students chuckled when they understood. A few nodded in sympathy.

After graduating with that B average and being rejected for medical school 29 times, Dr. Tabak went to graduate school for a master’s degree at Hunter College, which again was free. From there with the help of mentors, he attended Columbia University School of Dental and Oral Surgery, where he graduated last in his class. This admission led to more gasps from the students.

He challenged the students to think about what you’re called when you graduate last from dental or medical school. The answer: Doctor.

From there, Dr. Tabak told about his career as a research dean at a medical school and his journey to NIH, which started in 2000 when he became director of the National Institute of Dental and Craniofacial Research. Today Dr. Tabak is not only the principal deputy director of NIH, he is the deputy ethics counselor of the agency.

One of the students asked him how he stayed motivated after so many rejections. He replied, “It was hard, but at the end of the day I had an inner belief in myself. Even if doors were shut, I would search for the next door.”

To make sure the students were fully ready to learn, Lynne Holden, MD, president of Mentoring in Medicine, said there would be no yawning or chewing gum. Instead, she urged them to “sit up straight” and “take full advantage of the day.”

She explained that students from all over the country wished they had the opportunity to be at NIH for this program.

“We are here to help you pursue your dreams,” she said. “Today is a day of wonder.”

Dr. Nakela Cook of NHLBI stressed the importance of having mentors throughout your life.

Dr. Lynne Holden, president of Mentoring in Medicine, told the students, “We are here to help you pursue your dreams.”

♢ A Day of Wonder ♢

After the keynote speaker, the students heard a panel discussion. Dr. Mike Huerta shared research about the human brain. The associate director of NLM and the library’s coordinator of data and open science initiatives said, “To understand the brain is to understand what it means to be human.”

Dr. Jeff Day, informatics fellow at NLM, summed up his career like this: “I’m just a guy who draws medical stuff.” But when the students laughed in delight at his medical cartoons and videos, they knew just how rewarding and fun it could be to combine a career in medicine with a career in cartooning.

Nakela Cook, MD, a medical officer at the National Heart, Lung, and Blood Institute, grounded her talk in the importance of mentors. On the screen behind her, she shared photos of her mentors along the way. They ranged from her parents to professors to physicians.

Michael Wolfson, PhD, talked about the future and how the institute where he works—the National Institute of Biomedical Imaging and Bioengineering—harnesses the power of technology.

Later in the day, the afternoon keynote speaker, Roger Mitchell, MD, chief medical examiner in Washington, DC, told the students about how he became a leader despite his circumstances. He said he got to the point where it “became second nature to be successful.” He encouraged the students to stay engaged even when life is hard and to remember that “just because you don’t have doesn’t mean you will not be.”

♢ A Day of Action ♢

Students experimented at hands-on activity tables, organized by several NIH institutes, Mentoring in Medicine, and the Association of American Medical Colleges. Any student who wanted to know what it was like to sew someone up after surgery had a chance find out how challenging and interesting it could be by sewing up a slit in a banana peel. At another table, licorice, marshmallows, and gumdrops were fashioned into strands of DNA. Other activities included teaching how to remove a foreign object from the eye, testing your sense of smell, and exploring ways to watch sugar intake.

And any student who wanted to dress for success could don a mask, gloves, and coat just like many medical professionals.

A student practices giving chest compressions on a dummy as part of learning about cardiopulmonary resuscitation (CPR). 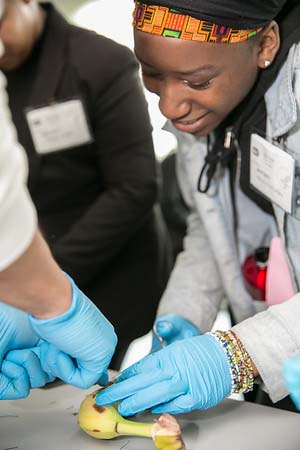 A student learns what it might be like to sew up a patient after surgery by stitching up an opening in a banana peel.

Tamia Martin of John Haden Johnson Middle School in Washington, DC, says she woke up excited to attend the Mentoring in Medicine event. “Medicine is here to cure us and improve our lives,” she said, but how exactly that happens was a mystery to Tamia.

Later in the day, she would learn that the mystery of medicine begins with young people like herself who grow up motivated, curious, and persistent.

Kyrese Jenkins, also from Johnson Middle School, had a personal interest in attending the Mentoring in Medicine event. He had a close relative die of cancer, and he wanted to learn more about the disease and the side effects of the medicine to treat it. He was in the right place to learn.

For Dewayne Artis, also a student at Johnson Middle School, coming to NIH was a perfect opportunity. “Science is my favorite subject,” he said.

Cuong Nguyen, 17, of Laurel High School in Maryland hopes to figure out if he wants to go to medical school. He told NLM in Focus, he’s debating between studying neuroscience or becoming a neurologist. “I see the brain as a majestic part of the body,” he said. Cuong knows what it’s like to see someone struggle as his grandmother, who suffers from a neurological disease, lives with his family.

Sharon Altot, 17, also of Laurel High School, was a bit in awe of NIH’s campus. She said she could tell that the campus is a “comfortable place for learning.”

And on Friday, April 7, 2017, the NIH campus was the perfect place for 450 middle and high school students to learn, to laugh, and to discover.

2 thoughts on “Mentoring in Medicine Event Surprises and Motivates Students”