Oh sure, she drew pictures of Ninja turtles when she was growing up, but art was never Kristen Browne’s thing. Biochemistry was.

As a biochemist, she ran a lab, did research, and published papers. 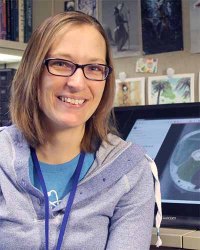 But one day, the Vancouver native and University of British Columbia graduate was online and came across a graduate program in biomedical communications at the University of Toronto that had a program that emphasized graphics and technology.

She was intrigued, but intimidated. She thought, “I could never get in there.” She had no training in art.

Then her lab started having funding issues.

Browne began doing more than daydream about that University of Toronto program. She started taking art classes in the hopes of getting in.

Her expectations were low. The program was very competitive.

She got in. “I felt really lucky,” she said. “I think it was mostly because of my research background.”

In 2013 at the age of 30, she went back to school to study biomedical communications.

“I was interested in big-picture problems versus drawing pictures for labs,” she said. “It was like what are some of the fundamental problems in the field of medical communication that you can address? Is there some general area that doesn’t have a lot of visualization? And what strategies do you have that could improve that?”

Her first opportunity to test her answers to these questions outside of school came during the summer of her first year in the program. Her husband was at NIH, working at the National Human Genome Research Institute as a postdoc, so Browne looked into fellowships in medical communications and found one in medical informatics at NLM’s Lister Hill National Center for Biomedical Communications.

“I was the first medical informatics fellow that the Audiovisual Program Development Branch had ever had,” she said.  “They’d never had a fellow before since the graduate programs for my field in the US have classes during the summer.”

Browne came back the next summer, and now she’s in her second year of a long-term fellowship.

“Finding accurate three-dimensional models of body parts is really difficult,” said Kristen Browne, MSc. “If you can find them, they’re usually very expensive. And when they’re free, the quality is so low.”

One reason is the expertise of the people making the models.

Browne is bridging that gap.

As she said, “I’m in the middle of both fields.”

Browne is using her background in 3D modeling and anatomy to build a database of body parts. This open-source library of medical imaging-derived 3D models will deliver information that can be used for educational 3D gaming, virtual reality, augmented reality, 3D printing, and animation.

“We’re building a library of real people’s anatomy,” Browne explained. “We have libraries of medical imaging, but no one knows how to interpret these medical scans but a doctor. Here anyone can go in and see what a heart from that imaging looks like.”

Posterior view of the Visible Human male being developed by Kristen for the NLM 3D Anatomy Library.

The first 3D parts are based on the male model in NLM’s Visible Human Project. Sometimes she has to fill in information. “There are things that are missing that I’ve had to reconstruct,” she said. “For example, these blood vessels are kind of collapsed so I’ll have to fill in what’s missing based on knowledge.”

Browne hopes to have a Beta version up within a year.

“There’s going to be thousands and thousands of models,” said Browne.

And when the first set of parts is complete, Browne will start working on the Visible Human Project female and then onto human datasets from Korea.

“We’re working on resources that will give people the tools to create their own platforms and applications,” she said. “It could have a pretty significant impact.”