Dr. Jeff Day says it was his art that gave him the “extra oomph” that set him apart from other medical school applicants.

And ironically, Day says it was medical school that paved the way for him to pursue his lifelong dream of becoming a cartoonist.

Art on the side

In high school, Day was always drawing. He cartooned a guide to playing chess and cartooned for the school newspaper. In college, he served as the illustrations editor for the college newspaper, and he minored in studio art. 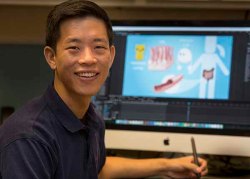 Even in medical school, Day kept at it. He created anatomical sketches for study and illustrations for fundraisers, and he had a few individual cartoons published in national newspapers.

During his final year of medical school at Case Western Reserve University, he got the okay to write and illustrate a children’s science book rather than do a research project. The result was Don’t touch that!, a cartoon guide to dangerous North American wildlife.

“I got to combine everything I loved: cartoons, kids, and wildlife,” said Day.

This opened up a new world for him.

He thought, “Maybe I can do something with science and communication and art.”

During his residency in pediatrics, it was obvious to Day that as much as he loved children and medicine, clinical work wasn’t for him.

After medical school, Day worked at one of his favorite places in the world—the Cleveland Museum of Natural History. He created camps for kids interested in medicine, forensics, and veterinary medicine. He also ran a future scientist program and developed programs for schools and weekend programs for both children and adults.

He loved communicating about science, but he couldn’t help but wonder:

“What if I could reach an even broader audience?”

Art was the answer.

To improve his communication skills and reach more people, Day needed to get back to art. He looked into graduate schools for medical illustration. 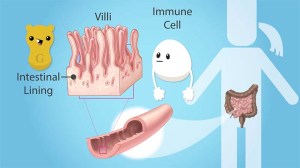 A scene from Jeff Day’s animation “Gluten and Celiac Disease.”

It was a little daunting for Day. While other candidates had formally studied art, Day had always done it on the side.

After interviewing at Johns Hopkins University, Day decided their medical art program was for him. He felt fortunate to be accepted. This time, it was his medical background that got him into art school.

One of his favorite classes was with NLM’s own Anne Altemus, acting chief of the Lister Hill National Center for Biomedical Communications’ Audiovisual Program Development Branch, which provides service support for and coordinates the use of NLM audiovisual facilities.

During Altemus’ class, Day led a team that designed a website about hematopoetic stem cells for patients. The project combined a lot of things Day enjoyed: writing, clinical medicine, public speaking, and art.

He approached Altemus for advice and became an informatics fellow at NIH after he graduated. 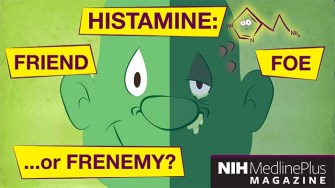 A scene from the upcoming animation “Histamine: Friend, Foe…or Frenemy?”

At NLM, Day is working on an app, animation, and cartooning.

The app is designed for people with movement disorders, such as Parkinson’s disease, so they can record their symptoms.

As a member of the editorial team of NIH MedlinePlus magazine, Day creates animations to supplement online content.

Day turns to TED-Ed and NPR for inspiration for educational cartoon animations using video. “I hope the ability to share the videos through social media will help spread public health messages as well as draw new visitors to NLM’s content and help promote NIH research,” he said. Day also frequently speaks to high school and college students at NLM and NIH events.

For Day, art and medicine are all in a “Day’s work.”