Director of NCBI, Dr. Jim Ostell called his journey to NCBI “a long and winding and strange road.”

Part one of this circuitous path, which NLM in Focus published last week, included college classes he never thought he’d need, counter-cultural days, studying the anatomy of the cricket, borrowing a secretary’s computer because it was the only one available, and teaching a computer course to biologists.

We pick up Ostell’s journey in Cambridge where he is waiting to hear from the thesis committee at Harvard about the status of his dissertation.

An argument had ensued.

Ostell’s thesis committee was having difficulty evaluating his work.

The three-person panel was engaged in a philosophical argument that centered around this issue: Could his work be considered biology or was it actually computer science? Two of his professors felt computational biology was the future of molecular biology. The third reviewer strongly disagreed.

No one would budge.

His degree hung in the balance.

When the committee member who didn’t see a future in computational biology left the committee, Ostell thought he could finally finish his thesis.

“I went for my committee review, which is normally pro forma at that point,” said Ostell, “but they discussed my thesis and said, ‘Well, we want you to do more.’” They asked for additional source codes and explanations.

“This isn’t supposed to happen. You’re not supposed to go to your defense unless you’re done,” he said. “I was heartbroken.”

He dragged himself back to the lab, where he was met with champagne. 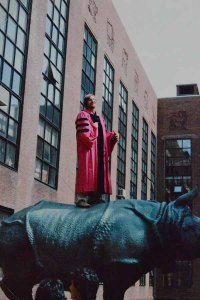 Ostell in his Harvard doctoral gown standing on one of the rhinos in front of the Harvard Bio Labs, when, he says, “I finally got my PhD.”

“Everyone was ready for the party,” he said. He had to tell the truth: “They didn’t pass me.”

His friends’ response: “Have some champagne anyway.”

Of course, he did.

That evening he found out more. “After the defense, the committee normally takes you out to dinner, so we’re walking behind Harvard Yard and headed out to dinner and one of the members of my thesis committee said, ‘I just want to say what a great job you did, and what a good thesis that was.’”

Their reaction, said Ostell, was “We don’t normally read every thesis carefully, but yours was unusual, so we all did. We’re Harvard professors. We can’t bother to read something and not make criticisms and comments. So, it’s kind of an honor.”

It didn’t feel like much of an honor at the time, but Ostell went back to work and created another volume.

His thesis accepted, Ostell earned a PhD in cellular and developmental biology in 1987.

At that time, Ostell was living in a farm house in Vermont on seven acres of land on a river with a view of the mountains. And he was teleworking before the term was well-known, developing commercial molecular biology software. 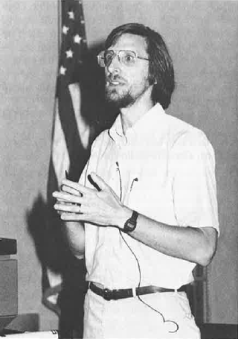 Dr. Ostell in 1990, serving then as chief of NCBI’s information engineering branch.

“It was pretty idyllic,” he said.

Ostell recalls being asked at parties “What do you do?” His neighbors were raising organic mushrooms and making lutes out of natural woods.

And then there was Ostell.

At the point where he was thinking maybe he could write software for local stores or banks to become more integrated in the community, he got a call requesting his help on a grant review committee at NIH.

He traveled to DC to serve on the committee.

Sitting next to him was David Lipman of the National Institute of Diabetes and Digestive and Kidney Diseases. Lipman had been active on a separate committee helping to establish NCBI.

Lipman asked Ostell to take a walk, and as they strolled around the NIH campus, Lipman told Ostell about the plans for NCBI and how cool it was going to be.

And then he asked the crucial question: “Have you ever thought about working for the government?”

Ostell recalled, “I never had the slightest idea to work for the government,” but the timing couldn’t have been better, and “David was a good salesman.”

When Ostell returned to Vermont, he confessed to his wife, “I just got this offer to go to NIH, and I think I might like to do that. And to my amazement, she said okay.”

But the deal was that they would return to Vermont in five years. “She still reminds me,” said Ostell.

Ostell and his wife sold their place in Vermont, packed up their ’64 Ford Falcon and bought a house in Rockville, Maryland, so he could take the job at NCBI.

It wasn’t until after he arrived that Ostell found out that the legislation to create NCBI had not yet been passed.

“Knowing what I know now, that was crazy,” Ostell said.

But Ostell also said, “Fortunately the legislation did pass, and I’ve been here to this day.”

“In the beginning, it seemed very disorganized,” said Ostell. “NCBI was tiny. There were 12 people.” 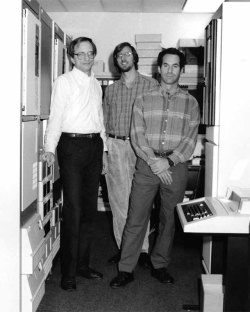 They’ve been called the Mt. Rushmore of NCBI: Dennis Benson, Jim Ostell, and David Lipman (circa 1989).

And that dozen had a lot to do.

“We were going to be the first public center of biotechnology information,” he explained. “At that time, it was academics or commercial developers like me who were involved in bioinformatics. That was it.”

What was happening was revolutionary.

“The notion that there would be a federal center in bioinformatics not looking for profits and not after grants was a completely different idea,” said Ostell.

Ostell and Lipman, together with Dennis Benson, who was part of NLM’s Lister Hill Center and would become chief of NCBI’s Information Resources Branch, explored the possibilities about what this new center could be.

This way or that

The pair approached James B. Wyngaarden, who was NIH Director at the time, and explained they could do it two ways.

“One way was to take on responsibility for the different databases for the projects that were funded, transfer them to the Library, and try to manage them in a coordinated way. Or we could keep them the way they were, and we would act like consumers and take data they produce and try to build tools and resources on top of this, but we won’t control the databases themselves,” said Ostell.

To help, Wyngaarden called in the legendary James Watson, co-discoverer of the structure of DNA.

“He wanted Watson to be there because it was also the dawn of the Human Genome Project. He started asking us, ‘Do you think that GenBank is the Human Genome Project?’” said Ostell. “We were a bit confused by this, but through the discussion it became clear that Watson knew he would need computer support, and GenBank was the only name he knew about in that domain. It turned out there were lots of parties in discussion and lots of politics around this, much of which we were blissfully unaware of.”

“In the end, we weren’t intimately connected with the Human Genome Project,” said Ostell.

There were many decisions to be made about NCBI.

“I think we kind of stuck to our original notion that we’d do the kind of work not well-suited to grant cycles, such as building basic resources that must be stable and persist over longer times. And it’s more or less worked that way,” said Ostell. “We also recognized that siloed databases—for example, at the time, the protein database was separate from the DNA database and both of them were separate from the bibliographic database —needed to be well-integrated, so that a scientist could move smoothly from a gene to its protein product to the papers describing its functions.”

“Our first big project was to take all these disparate resources and integrate them together,” said Ostell.

“We took all the protein databases, all the DNA databases, and part of MEDLINE and put them into a common data specification that followed an international standard, and we made it all available for free, all connected together so they could build cool tools,” said Ostell. “I was expecting people to go ‘yeah, that’s fantastic.’ Nobody did.”

Ostell speculated why. He said, “I think it was too sophisticated at the time. The other thing is that the successful companies were on top, and if you’re on top, there’s only one way to go if things change. I was too naive to realize this.”

He sought out someone from industry with whom he was friendly. His response to Ostell was basically, “So wait a minute. You’re expecting us to get serious now?” And I said, ‘Yeah, you know molecular information is going to be big time. You can’t be mucking around. We need a big, integrated system for this, and we’re offering a platform for free, but we’re not going to compete with you.’”

But nobody seemed to be building on the base NCBI had created. Ostell’s reaction?

“We’ll do a demonstration to show that it’s good, and so we built the first Entrez system,” said Ostell. “We built a little interface where you could look up an article, and then from the articles you could link to the DNA and proteins. And then we made it available on CD-ROM, and people loved it. And it spread like wildfire.” 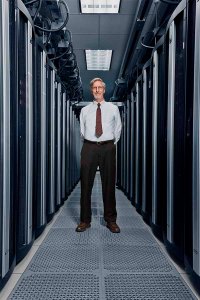 Among other things, this was the beginning of PubMed—but again they had an unexpected response.

“We expected people to really like it,” said Ostell. They did. The response they didn’t expect came from companies.

“The companies really hated it, even though we made a library available with it so they could use it without writing the code. They could call our functions, take the data, and they could add their cool tools to it. They didn’t want to do that. They wanted a completely proprietary system. They complained to Congress that we were competing with private enterprise. That led to problems.”

But he pointed out, “Other companies defended us.”

Although things looked bleak for a while, the support from several companies and from the scientific community saved NCBI and supported the notion that core biomedical data and tools should be widely and freely available to foster continued scientific advances.

“We’ve expanded more and more, taken on more and more things,” said Ostell, looking back. “We’ve gone from 12 people and a time before the word ‘bioinformatics’ really existed and no internet, and we’re now a staff of 700 people. We have hundreds of data resources. We have 4 million users a day. We’re running on the internet at about 7,000 web hits a second.”

“It’s been quite the sleigh ride from the secretary’s word processor and my light microscope and pencil,” said Ostell.

After 29 years at NCBI, Ostell said, “I’m sort of at the tail end of my trajectory. I’m not expecting any big surprises after this”—his voice trails off— “but you never know.”

2 thoughts on “More Twists than the Double Helix: Jim Ostell’s Surprising Path—Part 2 of 2”