The National Library of Medicine was located at three prestigious places in Washington, DC, before moving to the National Institutes of Health campus in Bethesda in 1962. The questions above hint at those three locations.

Can you figure them out?

The most famous house?

The most famous theater? 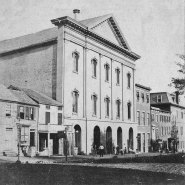 On April 14, 1865, President Abraham Lincoln was assassinated while attending a performance of “Our American Cousin” at Ford’s Theatre. After citizens protested against further productions taking place at the theatre (and Mr. Ford received a threatening letter), the Federal government took over the property and purchased it the following year (1866) to house the Army’s medical records, museum, and—you guessed it—the Library.

The most famous museum? 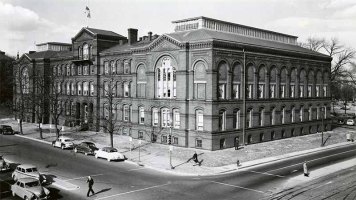 The Smithsonian: From 1887 to 1962, the Library was located on land where the Smithsonian’s Hirshorn Museum now stands. At the intersection of 7th Street and Independence Avenue, SW, the Library occupied a stately structure that became affectionately known as the Old Red Brick.

If you’d like to learn more about the Library’s past—including our name changes and why the historical collection was shipped to Cleveland for safekeeping during World War II—check out A Brief History of NLM, along with the illustrated history of the Library, Images of America: US National Library of Medicine.

NLM in Focus is a product of the NLM Office of Communications and Public Liaison. You’re invited to subscribe to receive word of future articles. We welcome your comments, likes, and shares.