Happy New Year! As we look back at 2018, we’d like to share a few NLM in Focus stories about some of the people and services from the National Library of Medicine that are making a difference in scientific discovery and public health.

Winter 2018
We posted a profile of Dr. Kira Makarova of NCBI, a scientist whose supervisor calls her “the best collaborator I have ever known.” We introduced readers to the Board of Regents  and NCBI’s Evolutionary Genomics Research Group. During Women’s History Month, we challenged readers to put names to stories about 12 pioneers in the field of medicine and health. 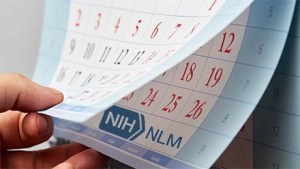 Spring 2018
We looked back to 1968, the year NLM both officially became part of the National Institutes of Health and played a role in a legal precedent that would result in new copyright law. We also celebrated Public Service Recognition Week.

Summer 2018
Dancing and reading were on the agenda, as was highlighting social justice and All of Us. We also interviewed Colleen Bollin of NCBI about her career—and her career advice. And we looked at NLM by the numbers.

Fall 2018
We had a bit of fun in October with Halloween treats, the Joy of Stacks, and a look at a few ways NLM inspires laughter (or at least a chuckle). We did something we’d been meaning to do for a while: We caught up with the catalogers. We also gave thanks. And as the December holidays arrived, we sang and sang again.

And we’re still singing, this time our praises for you, our readers.

There were about 36,000 of you this year, and together you viewed about 77,000 pages. You also seemed to like what you found. Throughout the year, you rewarded us with comments, likes, and even the occasional high five!

Next year, we look forward to profiling more scientists, telling you what’s coming up in the exhibition program, sharing more news about NLM preparing for its third century, and much more. Be sure to subscribe so you don’t miss a thing.