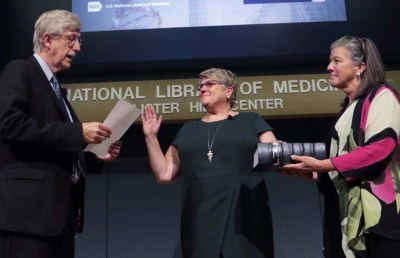 Dr. Francis Collins, NIH Director, administers the oath of office to Dr. Patricia F. Brennan, Director of NLM, during the swearing-in ceremony at the library on Monday, September 12, 2016. Dr. Brennan’s sister, Dr. Jean F. McGuire, holds the commemorative copy of the US Constitution used for the event. (Photo: Ernie Branson)

On September 12, Patricia Flatley Brennan, RN, PhD, raised her right hand and publicly swore in as director of the 180-year-old U.S. National Library of Medicine. She is the first woman and first nurse appointed as director.

In a ceremony at NLM’s Lister Hill building, Dr. Brennan became the 19th director of the Library and the fourth person to serve as director since the institution became the US National Library of Medicine 60 years ago.

In her introductory remarks, NLM Deputy Director and former Acting Director Betsy Humphreys provided a historical perspective of the Library and described Dr. Brennan as exactly the right choice at the right time.

She began her remarks by introducing herself—personally and professionally. She is the mother of her son Conor, the daughter of Lois and Tom Flatley, and the second of ten siblings, many of whom were in the audience. Dr. Brennan has blended nursing and industrial engineering in a vibrant research career applying informatics to empower patients and caregivers.

Using slides and videos, her presentation drew on the Library’s history and celebrated its present to focus on its future. “As we anticipate our third century, it is important to look around, outside of this library, to forecast the health challenges that we must help solve,” she said, citing genetic discoveries, precision medicine, infectious diseases, and chronic diseases.

“The future will be defined by data,” Dr. Brennan predicted, with a goal of having information available and useful everywhere and of accelerating scientific discovery. She said, “We need to be ready.”

After Dr. Brennan’s presentation, Dr. Collins spoke for a few minutes before delivering the oath of office. He shared, based on the broad diversity of programs and disciplines in the NLM portfolio, how challenging it was to find all the attributes needed to lead NLM in a single leader.

Dr. Collins called Dr. Brennan “ideally suited to lead the NLM in an era of precision medicine” and praised her for having a worldview that “is both nuanced and optimistic.”

“I, [name], do solemnly swear (or affirm) that I will support and defend the Constitution of the United States against all enemies, foreign and domestic; that I will bear true faith and allegiance to the same; that I take this obligation freely, without any mental reservation or purpose of evasion; and that I will well and faithfully discharge the duties of the office on which I am about to enter. So help me God.”

Before initiating the swearing-in, Dr. Collins explained that the language for the oath of office is the same for most Federal employees, including members of Congress and the Vice President. (The oath is a little different for the President.)

Adding to the gravitas of the swearing-in ceremony, a commemorative bound copy of the US Constitution, including analysis and interpretation (and coming in at over 2,300 pages), was used for the oath of office. The book was originally presented to Congressman Claude Pepper, author of the legislation creating the NLM National Center for Biotechnology Information, at the 200th anniversary of the signing of the Constitution in Philadelphia in 1987.

As her family, friends, coworkers, and guests gave her a standing ovation, Dr. Brennan hugged her mother and waved to the crowd.

Robert Greenes, MD, PhD, chair of the NLM Board of Regents, had the final say of the ceremony as he gave the “warmest welcome to Patti.”

After the ceremony, guests from Wisconsin to Washington, DC, gathered for a reception hosted by the Friends of the National Library of Medicine that felt a bit like a family reunion. Attendees mentioned feelings of energy, promise, and excitement in the air as the Library prepares for a third century.

Dr. Patricia F. Brennan addresses the role of data and technology in the library’s future. (Photo by Caffeine Photography) 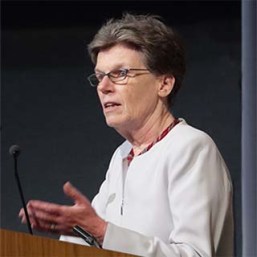 The US Constitution on which Dr. Brennan was sworn in is a commemorative copy presented to the Hon. Claude Pepper in 1987 at the 200th anniversary of the signing of the Constitution. (Photo by Kathy Cravedi)

Dr. Brennan and her mother Lois watch the video that opened the swearing-in ceremony. (Photo by Caffeine Photography) 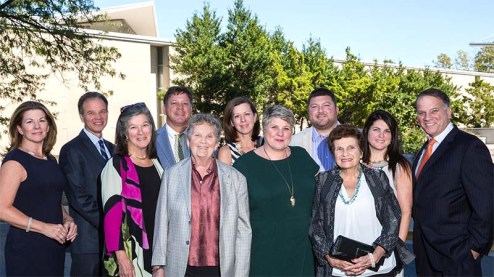 Robert Greenes, MD, PhD, Chair of the NLM Board of Regents, welcomes Dr. Brennan to her new position as director. (Photo by Ernie Branson)

2 thoughts on “Dr. Brennan Publicly Sworn in as NLM Director”