As we celebrate National Women’s History Month and the success of the film Hidden Figures about the remarkable story of Katherine G. Johnson, Dorothy Vaughan, and Mary Jackson, mathematicians working at NASA in the 1960s, NLM in Focus is pleased to share some links to photos, bios, and videos of African American women in science and medicine. 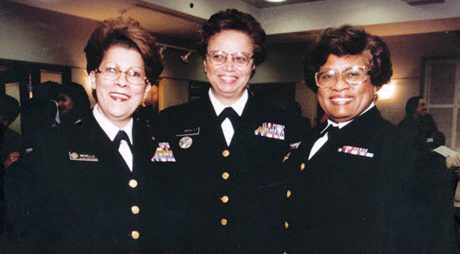 Admirals Audrey Manley (center) and Joycelyn Elders (right) were not only outstanding physicians. Both also achieved Flag Officer Rank in the United States Public Health Service Commissioned Corps and served as the nation’s highest ranking public health official, Surgeon General (Manley as “Acting”). They are joined in this photo by Antonia Novello (left), the first woman and first Hispanic to serve as Surgeon General. (Undated photo courtesy of U.S. National Library of Medicine.)

In our Changing the Face of Medicine exhibition, African American women are featured in photos, biographies, and in their own words. Some of the women are also featured in videos, links to which are at the bottom of their biographies.

Digitized images, books, and more can be downloaded by typing a search term, such as “African American women,” in Images from the History of Medicine. Many of the names behind the historical images are still “hidden,” but the photos reveal information about the time they lived.

In addition, NIH’s Office of Equity Diversity and Inclusion, led by attorney and civil rights expert Debra Chew, provides stories on their webpage about women NIH leaders such as Dr. Avilés-Santa, medical officer at the National Heart, Lung, and Blood Institute, and Dr. Rashmi Gopal-Srivastava, director of the Extramural Research Program in the Office of Rare Diseases Research.

In Hidden Figures: The American Dream and the Untold Story of the Black Women Mathematicians Who Helped Win the Space Race, the book upon which the movie Hidden Figures is based, the author Margot Lee Shetterly wrote, “Their path to advancement might look less like a straight line and more like some of the pressure distributions and orbits they plotted, but they were determined to take a seat at the table.”

It was 30 years ago that Congress passed Public Law 100.9, designating March as Women’s History Month. NLM in Focus hopes that historical photos of African American women in science and medicine will become more plentiful and freely available. NLM in Focus is proud to recognize women of color in health and medicine and looks forward to the day when there are more women of color with a seat at the table.