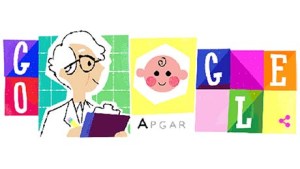 Have you Googled today?

Dr. Apgar was a pioneering physician in the field of maternal health.

She developed a test that babies all over the world are given at birth to quickly determine their health and viability.

After she developed this test, it became known as the APGAR score—A for Appearance, P for Pulse, G for Grimace, A for Activity and R for Respiration—with many not knowing that Apgar was not just an acronym but a real person.

As part of NLM’s Profiles in Science project, the Library collaborated with the Mount Holyoke College Archives and Special Collections to digitize and make available many of her papers. Dr. Apgar was also featured in the NLM exhibition Changing the Face of Medicine, which explored how women have influenced and enhanced the practice of medicine.