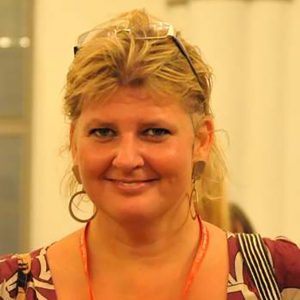 Hilda Bastian wasn’t born a science person. The native Australian became a fan only after realizing how her lack of scientific understanding had led her astray—and possibly endangered the lives of babies.

She had been a leading advocate for home births when her own research showed them to be riskier than she’d thought. She later became a founding member of the Cochrane Collaboration, which compiles and analyzes scientific research. Now, Bastian works for the US government, leading PubMed Health, a project around clinical effectiveness and research, and in her spare time she writes a blog advocating scientific understanding, which she illustrates herself with cartoons.

STAT talked with Bastian about her unusual background, her distrust of doctors, and what she really thinks of frogs.

Were you always an artist? Did you grow up drawing cartoons?

I didn’t think of myself as an artist. My sister’s an artist. I was the writer. I can’t draw, but I didn’t let that stop me.

Now you see cartooning as part of your patient advocacy work?

I came to see consumer advocacy in the court jester role—the speaking truth to power part. In that context, cartooning became really important to me. You can say things in a cartoon that you can’t get away with in other ways, because you lower people’s defenses.

You describe your childhood in Australia as “grim.” What made it so difficult?

It was all related to World War II—there were a mixture of Germans and prisoners of war in my family. I’d hear this particular view [of the war] at home, but at school there was this real anti-German stuff. That was hard to reconcile. It was extremely difficult for me to understand what the truth even was.

I’m not one of those people who goes, “Oh, there’s a new kind of frog!” None of that stuff remotely interested me. It was only power and politics and lying and people.

I had a real fear of doctors, hospitals, police—hated them all. When I was pregnant—I was 20—the thing that scared me the most was the hospital. I ended up giving birth at home, which was just a fantastic experience—incredibly empowering and all that stuff.

When you first delved into home births, were you surprised by your own results?

Research I’d started, intending to prove how safe home birth in Australia was, became incredibly contentious data that showed there was a segment of it that was actually quite dangerous.

What do you think can be done to help people become better consumers of scientific information?

We go to school and learn things like algebra, but we don’t learn how to understand statistics and see through claims, whether it’s a politician’s claims or a marketer’s claims. There’s good evidence that you can teach people better [scientific] literacy, which is more important than being able to prove whether Pluto’s a planet or not.

By Karen Weintraub, freelance writer and contributor to STAT