With this article, we begin an occasional series on key events in NLM’s history that took place in 1968.

What’s in a name?

Since its founding as the Library of the Office of the Surgeon General of the Army in 1836, today’s National Library of Medicine has had several different names and affiliations.

From the National Mall to the NIH campus

By the 1950s, the Old Red Brick, which opened its doors as the library’s main facility in 1871, had fallen on hard times. Located on the National Mall at 7th and Independence, SW, in Washington, DC, it was running out of space for publications, librarians, and patrons.

As historian Wyndham Miles reported, “Parts of the structure were wearing out, some from age and some from lack of proper maintenance, the latter resulting from insufficient appropriations. During heavy rain, water came in around windows, accumulated in puddles on the floor, and caused paint to peel off the walls. It leaked through the skylights in Library Hall and dripped into wastebaskets and buckets placed around the floor and on tables. Tarpaulins had to be thrown over catalog cases, desks and card files had to be moved, work was disrupted, and books and journals were damaged.”

Deliberations began over where to move the Armed Forces Medical Library. Chicago, home of the American Medical Association, was one option. Washington’s Capitol Hill was considered, although library director Col. Joseph McNinch feared the Library of Congress would eventually absorb it, if placed there. McNinch, as Miles reports, “…came to favor Bethesda, Maryland, where the large Naval Medical Center and expanding National Institutes of Health were close together on opposite sides of Wisconsin Avenue.”

Eventually, McNinch’s vision became reality. As part of the 1956 National Library of Medicine Act, the Library would be attached to the Public Health Service, not the military, and given a building on the grounds of the National Institutes of Health (NIH).

The fledgling National Library of Medicine remained headquartered in the Old Red Brick until 1961, but prior to that time, NLM’s Board of Regents voted for a site on the old Glenbrook Golf Course, on the southeast corner of the NIH campus. That’s the location of NLM’s two buildings today.

The times were still a-changin’ 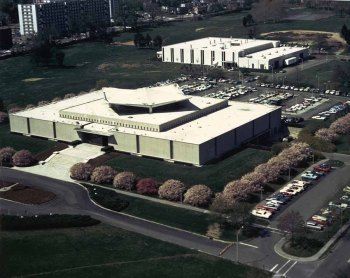 NLM opened its doors on the NIH campus in 1962—still not an official NIH component, but an arm of the Public Health Service, under the Office of the Surgeon General.

In 1968, Health, Education, and Welfare Acting Secretary Wilbur Cohen called for a study of the Public Health Service and the Food and Drug Administration, giving top priority to the organizational relationship of NIH, the Bureau of Health Manpower (now the Health Resources and Services Administration), and the National Library of Medicine. In a message to Congress, President Lyndon Johnson directed the Secretary to submit “a modern plan of organization to achieve the most efficient and economical operation of the health program of the Federal government.”

NLM, the Bureau of Health Manpower, and the present NIH would form a reconstituted National Institutes of Health. Mr. Cohen announced, “The National Library of Medicine will continue to serve as the Department’s vital center for health communications and related scientific information development.”

NLM Director Dr. Martin Cummings responded to the announcement with a quote that holds up well five decades later:

“We regard the Secretary’s stressing NLM’s ‘scientific information systems development’ as a mandate for the application, as rapidly as possible, of modern technology to biomedical communications.”

NOTE: NLM retains close ties with the Office of the Surgeon General and the Public Health Service. The Surgeon General or a representative speaks at almost all meetings of the NLM Board of Regents, the Library’s primary governing body.