What happens to former students involved in the Johns Hopkins University’s Center for Talented Youth?

Sometimes, they work at the National Institutes of Health and NLM.

That’s what happened to Adam Korengold and several NLM interns.

On June 25, they joined about a dozen other NIH employees wearing “Ask Me About My Awesome Job at NIH” buttons for the “Genetics, Bioinformatics, and Biomedicine” event for students from the Johns Hopkins University’s Center for Talented Youth and their parents.

Throughout the day, more than 75 tweens and teenagers from the Center participated in talks and tours of NLM and NIH. This second annual event was cosponsored by NLM and the National Human Genome Research Institute (NHGRI).

As part of the program, staff from NLM, NHGRI, and other NIH institutes were invited to speak with the students and parents for small group discussions during lunch.

For Korengold, an applications lead for the Office of Computer and Communications Systems at NLM, the chance to meet with students who reminded him of his childhood was irresistible. In speaking with students, Korengold drew upon the connections between research and science, communication, elections, and even football.

Ben Kussmaul addressed both college life and his internship in the Communications Engineering Branch at NLM. “I had a great time talking to students with the same passion for science that I had as a kid,” said Kussmaul of Swarthmore College. Other NLM interns who participated in the Johns Hopkins Center as children and met with the group included Rachel Cai of Gunn High School in California and Sanjana Singh of McLean High School in Virginia.

What happens to parents whose children get involved in the Johns Hopkins University’s Center for Talented Youth?

Sometimes they work at NLM.

For the second year in a row, Terry Yoo, PhD, of NLM’s Office of High Performance Computing and Communications and parent of two sons who participated in the Hopkins program, was the morning keynote speaker. He told the students about how technology and medicine are making personalized medicine possible. Dr. Yoo’s sons Ross and Duncan were active in the Hopkins program when they were younger. 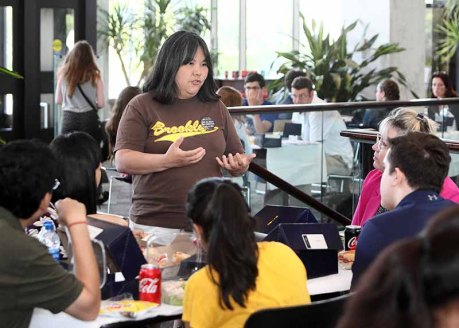 Roxanne Yamashita, PhD, talks with students about her work at NCBI. (Photo by Charlie Chang) 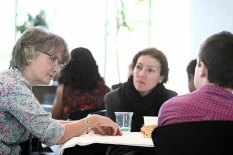 Who else from NLM got involved?

Sometimes people are surprised to learn that computer scientists work at NLM. In her afternoon keynote address to the students, Dina Demner-Fushman, MD, PhD, addressed that question and more as she outlined many professions represented at the Library and how researchers at NLM study how to understand communication information needs and communicate information. And in case the students needed a reminder, at the end of her talk Demner-Fushman answered her initial question about what computer scientists do at the Library. The simple answer: improving health!

In addition, intern Daniel Quintans of Swarthmore College joined Cai, Kussmaul, and Singh in meeting with the students during lunch.

What happened to the students from the Hopkins Center who participated in the program at NLM? 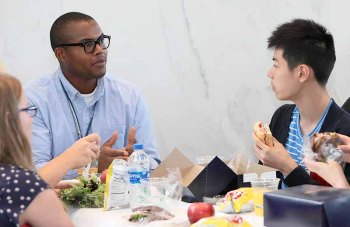 Rob Rivers, PhD, of the National Institute of Diabetes and Digestive and Kidney Diseases, takes time to speak with young people interested in science. Rivers serves as the program director in the NIDDK Office of Minority Health Coordination. (Photo by Charlie Chang)

They learned more than they expected.

Ashton Peoples, 16, and her mother, both from McDonough, Georgia, said they had no idea that speakers of such high caliber would be on the agenda. Indeed, both Dr. Yoo and Dr. Demner-Fushman gave inspiring keynote speeches.

For Noah Xu, 13, and his father Shi Xu of Philadelphia, the day provided a great opportunity to see the campus of NIH. Dr. Xu, a cancer researcher, remarked that several of his former classmates from both China and the United States work at NIH.

Misk Khalif, 16, and her mother Seynab Mohamed of Minnesota said they were particularly glad to be exposed to bioinformatics.

Maybe one day in the future, one or more of these young scholars will be back on campus, sporting a button that says, “Ask Me About My Awesome Job at NIH.”

The program at NLM was coordinated by Tara Mowery of NLM’s Office of Communications and Public Liaison and staff from NHGRI’s Education and Community Involvement Branch.

3 thoughts on ““Ask Me About My Awesome Job at NIH””