Valerie Schneider, PhD, dives deep—whether it’s into the ocean or her work.

Ironically, if it weren’t for a fish, this developmental biologist and deep-sea diver might not have rediscovered her love of genetics and landed a career as a staff scientist at the National Center for Biotechnology Information (NCBI).

Whether she’s 100 feet below the ocean’s surface or in her fourth-floor office at NIH, Schneider stays focused on what’s important for NCBI’s Information Engineering Branch.

Here she talks about her career, how diving makes a difference in her life, and why juggling everything doesn’t work. 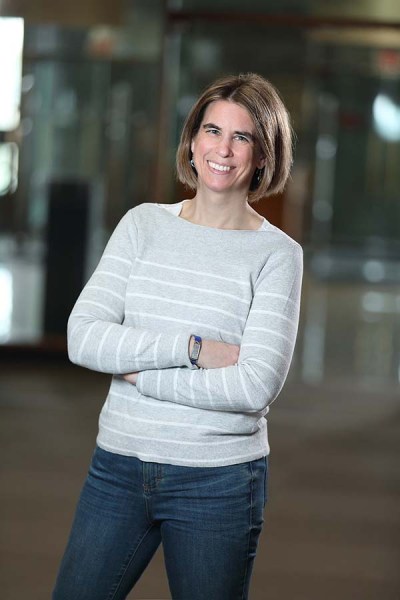 A love of genetics and biology presented themselves early. Schneider recalled as a child enjoying seeing cicada wings under a microscope, studying Gregor Mendel, and creating Punnett squares. Naturally, she would major in biology.

At Cornell University, Schneider had access to an array of biology classes. When she was introduced to the field of developmental biology and specifically embryology, it was “the coolest thing.”

For Schneider, “Development is a natural read-out for understanding genes: perturb a gene or gene interactions and you can often see the impact on the macromolecular level.”

Upon graduating in 1994, Schneider had options.

“At Cornell, there were three basic paths for biology majors if you were going to stay in the field: med school, vet school, and…the research path,” she explained.

Research won out, primarily because she realized that she wanted to learn even more about biology.

She applied to universities everywhere from Seattle to Boston and ultimately decided upon the PhD program at Harvard Medical School. “When you look at Harvard from the outside, you have this notion of what it must be like, and it was completely not like that,” said Schneider. “There was amazing research going on, and the people were down to earth and super friendly.”

She fit right in.

She studied Xenopus laevis, also known as the African clawed frog, which had embryos that were perfect for studying early development. The large size and minimal culture needs of frog embryos made it possible to perform all types of experiments that altered the typical developmental program. By using microinjections to perturb gene expression and an eyelash knife to do embryonic surgeries, she could learn how different parts of the embryo interacted to give rise to a head or heart.

Fate and a fish

She might have kept studying Xenopus laevis as a postdoc, but fate and a fish intervened.

In 2001, her husband accepted a position in the Philadelphia area, and the University of Pennsylvania had an opening in a lab that was using the zebrafish as a model system.

Looking back she said, “It was fortuitous because in the late ’90s, zebrafish as a model organism took off when Christiane Nüsslein-Volhard, who had won the Nobel Prize for her work in fruit flies, decided to develop zebrafish as a model system for developmental biology.

“Working with zebrafish brought me back to that first love I had of genetics, because, while frogs were amazing for doing development work, as a model organism for genetics, they have complexities with their chromosomes that make doing genetics really hard.”

She was doing both developmental biology and genetics.

“It was the best of both worlds.”

Her work also aligned with what was going on in the greater scientific world.

“The Human Genome Project had released their draft version about 2001 when I got started,” she said. “As I was cloning this gene in zebrafish, there wasn’t a complete zebrafish genome yet, but there was a zebrafish genome project.”

But what was next?

When her postdoc was over in 2007, Schneider had to wonder, “What’s next?”

She could become a principal investigator. She could take a position in industry. She could teach. Or she could leave the field entirely.

She went on “the faculty market” and was offered a tenure track faculty position.

Unsure of what to do on the day of the faculty interview, she drove to the dive shop. 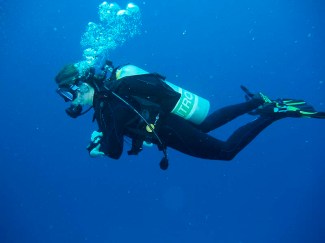 When she’s not working, Valerie Schneider is a certified scuba diving instructor and loves to explore “the other three-quarters of the planet.”

As a certified scuba diving instructor, she had developed friendships with people who shared her passion for being underwater. They were electricians, plumbers, accountants, and paralegals, but they were not biologists. They were people who reminded her that there was more to life than biology.

The trip to the dive shop helped Schneider see her situation more clearly. She should look at other options.

Coincidentally at that time, NCBI was hiring more scientists.

She explained, “By 2007, the Human Genome Project was moving into a new phase, and NCBI, which had been playing a role in a lot of the data management for the Genome Project, had joined this consortium to continue improving the reference. Just as I was finishing up my postdoc, there was a call for people to come curate the genome.”

But her post-doc professor wasn’t sure. He told her, “You’re going to really miss the lab.”

And yet some things she wouldn’t miss. “I didn’t want to spend my time writing for grants and stressing if I didn’t get funding. This had a huge appeal to me,” she said. And working at NCBI would mean that she’d be able to find the time to dive while still pursuing her interest in genetics.

The leap from academia to government felt huge. “Stepping away from the bench into a bioinformatics environment would be quite a shift. I didn’t doubt I could do it—but did I want it?”

Diving in at NCBI

“I loved the lab—and still do—but what was more important to me was the scientific question and the process of getting an answer regardless of the specific topic, as long as it was good science and an interesting topic. It was sort of an alignment of the stars or whatever that NCBI was looking for genome curators and a favorite part of my post-doc work was the genome.”

When she arrived on campus 10 years ago, NCBI was focused on curating the human genome.

“This meant working a lot with the developers to figure out what kind of software tools we needed to manage the genome and what kind of database structures we would need,” said Schneider.

It helped that she had a mentor.

A mentor makes a difference

“I had an absolutely fantastic mentor when I started here. Deanna Church pushed me in lots of areas,” said Schneider. “After I’d been here a couple of years, she encouraged me to take the lead on a complete overhaul of NCBI’s Clone database.”

She was up for it.

Then in 2013, Church left NCBI—and Schneider inherited a broad range of genome-associated tools and displays.

She called her mentor.

“I remember saying, ‘Oh my gosh, there’s so much going on and I have so many balls in the air,’” said Schneider. “I never forgot Deanna’s advice. She said, ‘You know what you learn in this job is not to be a perfect juggler; it’s knowing which balls you can let bounce. It’s prioritizing and understanding priorities and the dependencies between things.’”

Today as the program head for the Sequence Tools and Displays section (SeqView) in the Information Engineering Branch, Schneider still relies on that advice.

Only now, instead of focusing on each and every development task, she’s constantly monitoring organizational-level priorities and dependencies for the businesses in her program, which include BLAST, sequence display and analysis tools, and public facing interfaces for many of NCBI’s sequence databases.

“One of the things I love about this position is that I get a more holistic view of what’s happening at NCBI and being able to develop relationships and build collaborations,” she said. 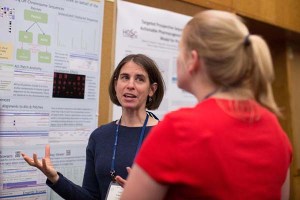 Valerie Schneider discusses her research at a recent poster session.

And the challenging part?

For example, she says, “Sometimes what’s the highest value to the customer might clash with what’s most scientifically interesting or technologically challenging. We’ve been doing some amazing engineering.”

Communication and being a female scientist

“NCBI works well because we have this mix of backgrounds, but sometimes communication can be challenging,” acknowledged Schneider. “It’s not that we speak different languages; we think a little differently. What one group might perceive as easy, the other may know is not so straightforward.”

In terms of gender, she said, “My perception of NCBI is that it’s pretty balanced, but when you dig into specifics, you find that more of the biologists are women and more of the developers are men, which means that as a biologist working with the development team I might be the only woman in the room even though there a lot of women in NCBI.”

No matter whom she’s meeting with, Schneider said, “I know I need to bring my A-game to the table.” For her, this means being prepared and being fully present. It also means not hesitating to ask questions. “I think it’s far worse to not ask the question and come out of a meeting or an interaction with someone completely lost,” she explained.

She also advises speaking with confidence. “Someone else once told me that with large groups of people, speak as if you’re the most confident person in the room,” she said. “Don’t be hesitant in the way that you present your opinion. And I found that to be good advice. Be strong and be open.”

Part of the reason Schneider loves to dive is that “it’s amazing to see the other three-quarters of the planet.”

Part of the reason she enjoys being a scientific leader at NCBI is the opportunity to “really appreciate the breadth of knowledge that’s here.”

Whether she’s submerging herself in work or water, this scientific adventurer keeps investigating.